Paul Holmgren will tell you that while the hockey community may seem huge, it’s really quite small.

Members of that close-knit community will come together in Denver on Dec. 9 to honor Holmgren and other new inductees to the U.S. Hockey Hall of Fame.

Holmgren’s hockey career has included more than 40 years with the NHL’s Philadelphia Flyers over parts of six decades, in addition to major contributions to American hockey, including serving as an original member of the U.S. Men’s National Team Advisory Group and helping guide Team USA to the 1996 World Cup of Hockey championship.

The St. Paul, Minnesota, native is the only person ever to serve as a player, assistant coach, head coach, general manager, and president of the Flyers, and today he serves as senior advisor for the club.

Drafted from the University of Minnesota in the sixth round of the 1975 NHL Draft, Holmgren’s NHL playing career began with the Flyers in 1976. It was the first of 500 games he played for Philadelphia in parts of nine seasons. He helped the Flyers to the Stanley Cup Final in 1980 when he became the first American-born player in NHL history to record a hat trick during the Stanley Cup Final. He earned a spot in the 1981 NHL All-Star Game and was the lone American on the Campbell Conference entry.

Holmgren was traded to the Minnesota North Stars in 1984 and retired following the next season.

Holmgren helped his teams to the Stanley Cup Playoffs in each of his nine full seasons in the league. 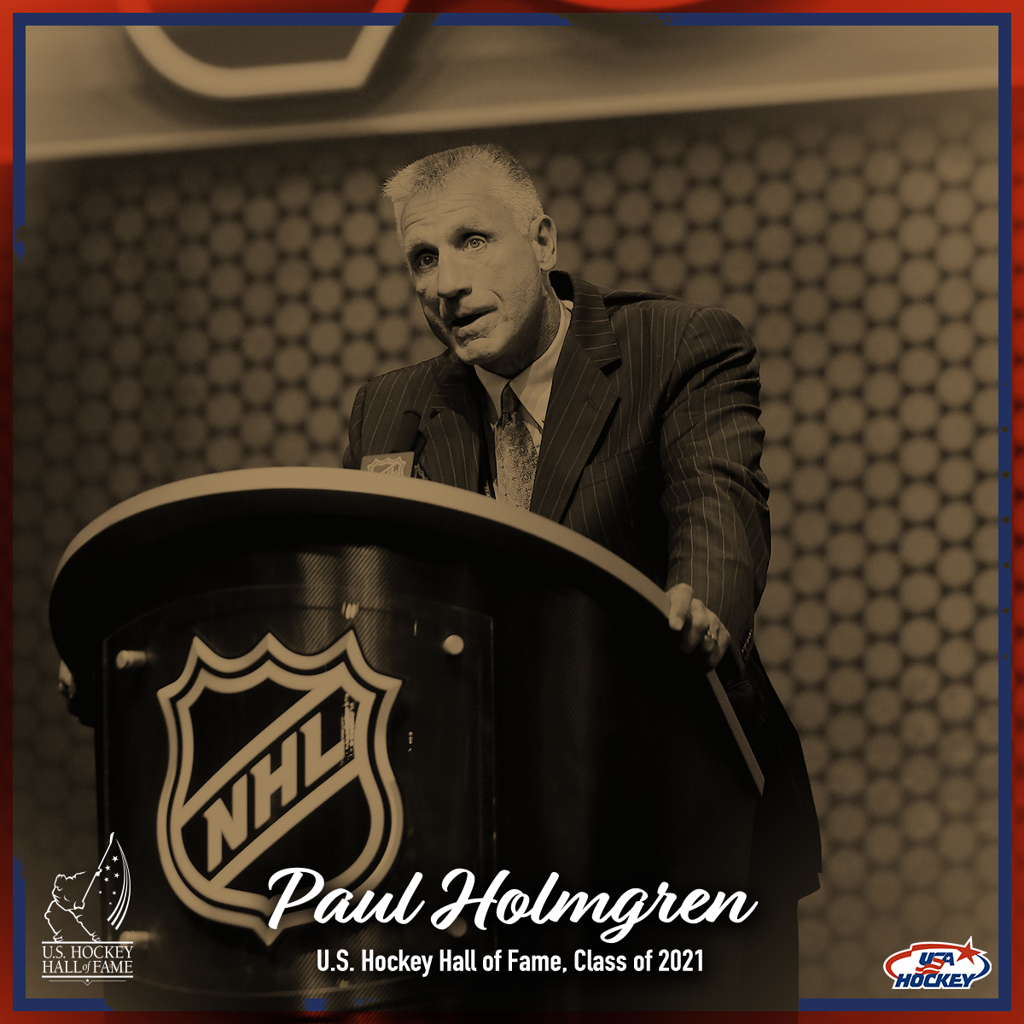 Holmgren became an assistant coach for the Flyers following retirement and was promoted to head coach in 1988. In his first season, he guided Philadelphia to the conference finals. Holmgren spent four years behind the Flyers bench before spending parts of four seasons with the Hartford Whalers as head coach and/or general manager.

As general manager, Holmgren led the Flyers through one of the most successful stretches in franchise history, with five consecutive playoff appearances and seven playoff series wins. That run included Philadelphia’s eighth trip to the Stanley Cup Final in 2010. He was promoted to team president in 2014 and served five seasons.

Holmgren took time before the induction to talk with USAHockey.com.

USAHockey.com: How does it feel to be a member of the U.S. Hockey Hall of Fame Class of 2021?

Paul Holmgren: I probably won’t get the total effect until the ceremony. It’s been a real whirlwind. Obviously, very humbling. I get all choked up when I think about the phone call. I’m a little anxious about how it’s going to be. I tend to get emotional with things like this. There’s so many great people that are going to be at the event. To be able to spend the time with my family and friends, it’s going to be a special night.

USAH: What does it mean to you to go into the U.S. Hockey Hall of Fame with Stan Fischler and Peter McNab, as well as the Class of 2020?

PH: I haven’t seen Stan in a number of years. I see Peter from time to time. The hockey community … it seems large at times, but it’s not. It’s very small. Everybody kind of knows each other, respects each other, and loves each other because of the love for the game that we all have.

USAH: Thinking back to the 1996 World Cup of Hockey, how special was it to be a part of that tournament?

PH: Oh, that was pretty cool. I just got let go by the Whalers. I was working back with the Flyers at the time and scouting, so I’d kind of been out of coaching for two or three months. Lou Lamoriello called me that summer … and asked if I’d have interest, and I jumped at the opportunity. I’ve always said the ’80 Olympic Team was obviously a great accomplishment what they did … but the next group of players that were spawned from the 1980 group was all the guys that played in ’96. They all grew up watching the 1980 [team]. They were probably 10 years old when the U.S. won the gold medal in 1980. Just a great, great group of players. To be a part of that was an incredible experience for me and just a fun time. And obviously to win was the icing on the cake.

USAH: You were a part of the inaugural World Juniors team in 1974. Seeing how that tournament has grown, is it cool to look back and reflect on that first tournament?

PH: I think we flew to Prague, and our equipment got lost. A game got canceled in Prague. Then we had to take the train all the way across into the Soviet Union at the time. It was a communist world back then and very eye-opening to 17- and 18-year-old kids who were making that trek over there to play hockey. It was an experience on a lot of different levels for all of us. Some of us had never gone on a plane before. It was surreal, is the word that keeps coming back to me. Overall, it was pretty neat.

USAH: You have served in multiple capacities with the Flyers. What does that organization mean to you?

PH: Forty of my forty-six years in professional hockey have been as a part of the Flyers organization in some capacity. It’s like a family to me. My roots are in Philadelphia. I don’t envision ever moving from that area. It’s my home. I still have many, many friends that work for the organization. Our friendships have grown over the years. I think I was incredibly fortunate to be drafted by the Flyers and end up with them. To play with that group of players that had won the two prior Stanley Cups and be part of that organization as a player for the next nine years was special for me. And to still be part of the franchise and the organization is also, well, they’re my family.

USAH: How have you seen hockey in the U.S. grow since you were growing up?

PH: The numbers don’t lie. I don’t know what it was when I played. It was probably less than one percent of the NHL was American-born players. I think we’re up to close to 20 percent now if I’m not mistaken. Hockey continues to grow in the United States. I think the NHL has done a good job in their expansion of putting certain teams in cities. You’ve got teams all over the continent now. You think back a few years ago, we had the first overall draft pick was taken out of Phoenix, Arizona. That’s an incredible feat. We still have a ways to go to catch up to Canada, but there’s enough players playing in the U.S. I think it’s up to us to continue to grow the game.

USAH: What has been the biggest piece of advice you have gotten over your career?

PH: My dad preached hard work. You work harder than the other guy. It was all about hard work. He stressed from a very young age that no matter what you do in life, if you work hard, you’re going to succeed. That’s probably the best advice. The first time I heard it was from my father.