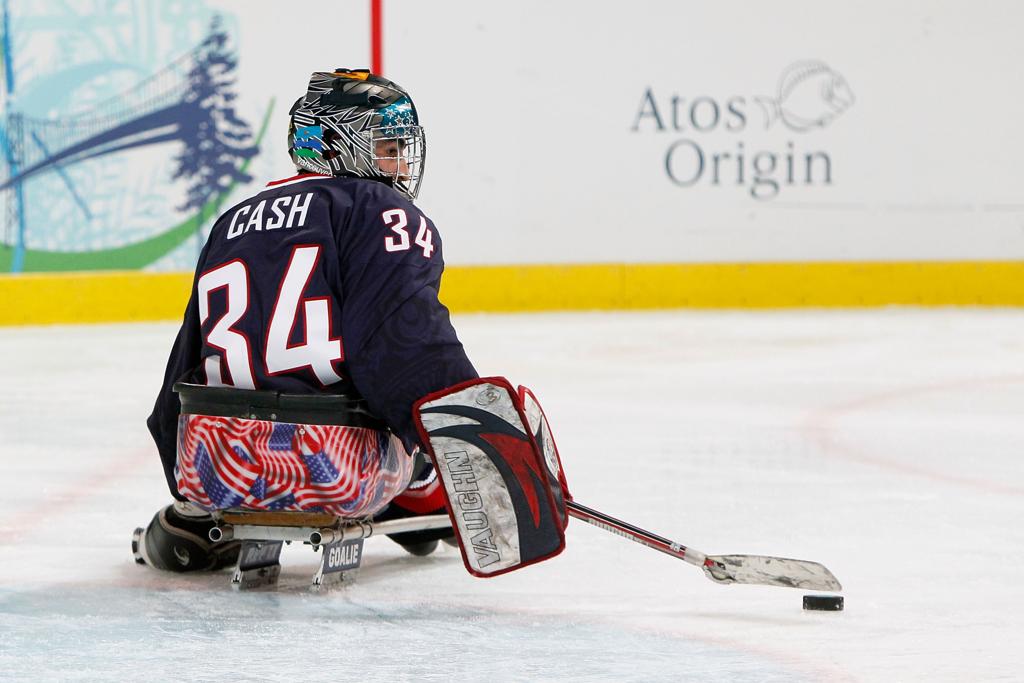 It didn’t matter the situation. Whether it was a pickup game, practice or a gold-medal game, Steve Cash just didn’t like to give up a goal.

“He had an unmatched compete level,” said Dan Brennan, USA Hockey’s director of sled national teams. “He was equally unhappy if he got scored on in practice as he was in a game. He tried to stop every single shot. I never saw him take a play off or look disinterested if the puck was shot his way. He was a real fierce, competitive guy.”

Cash was a dominant goaltender for the U.S. National Sled Hockey Team after earning his spot as a 16-year-old. Now 33, Cash will be the first Para athlete to go into the U.S. Hockey Hall of Fame. He will be inducted alongside Jocelyne Lamoureux-Davidson, Monique Lamoureux-Morando, Jim Johannson and Ryan Miller on Wednesday, Nov. 30 in St. Paul, Minnesota, as part of the Hall of Fame’s 50th class.

“Earlier in my career when we didn't have as much offensive depth on our team, we really had to rely more heavily on Steve,” said Declan Farmer, who played with Cash in two Paralympics and five world championships. “He was going to have to stop a ton of shots; he wasn't going to be able to let more than maybe one in if we were going to win, and he did it almost every time. He just made the most ridiculous saves. A lot of times, whether it's in practice or games, I think everyone on the ice knows that there's just no way a puck is getting through him.”

A native of Overland, Missouri, Cash spearheaded three consecutive Paralympic gold-medal teams from 2010-18, as well as winning five world championships. He had a 1.22 goals-against average, registered an .898 save percentage and won 103 of the 150 games he played in with the national team.

In his Paralympic debut as the starting goaltender at the 2010 Vancouver Games, Cash did not allow a goal in any of the five games en route to a gold medal, and then received the ESPY that year for "Best Male Athlete with a Disability."

Cash making history as the first Para athlete to be inducted into the U.S. Hockey Hall of Fame is a special moment for Farmer.

“It’s really great,” Farmer, a three-time Paralympic gold medalist, said. “It’s definitely a long time coming for Para athletes to be in [the hall]. Steve is the greatest American and world sled hockey player of all time. So he should be the one that’s trailblazing these achievements for adaptive athletes. We’re so excited for him and so excited for the things that are going to come down the line for all disabled athletes, for all adaptive athletes.”

As good as he was on the ice, he matched that when he wasn’t between the pipes.

“He’s a wonderful person with a unique sense of humor,” Brennan said. “I’ve always enjoyed getting to know Steve away from hockey because he’s a real giving person who cares a lot about things outside of sports. He’s a real good teammate. Probably the best words I can describe with this are ‘beyond dependable’.”

As perhaps the most well-known athlete in the sport, Cash never shied away from giving his time to others.

“He was always very generous with his time,” Farmer said. “I was down in Tampa and I was kind of running a sled hockey beginner training camp for players in the area or anyone who really wanted to come in through the [NHL’s Tampa Bay] Lightning. I wanted to get a goalie to help as well and asked Steve if he could do it and he was more than happy to come in.”

“He was just so generous with his time helping young goalies develop or helping the sport continue to develop in the country. He did that all over the place – he went to U.S. development sled camps as the goalie coach pretty much every year. He did tons of camps all across the country. He ended up doing an individual goalie camp for a few years.

“You don't see that from the best athletes in the world in a sport, you really don’t,” added Farmer. “Maybe they have their one charity or that one camp they do, but it’s really rare for someone who’s at the top of their game to just spend so much time developing and training brand-new goalies. That’s pretty wild – and he was more than willing to do that at all times.”

Cash retired before the 2022 Beijing Paralympics. As the U.S. got ready for the tournament, an exhibition series against rival Canada was played in St. Louis and Cash was asked to drop the puck in a ceremonial faceoff as part of celebrating his career.

“Every single player from Canada cleared their bench and skated over and shook his hand,” Brennan said. “And then our team did as well. But it just tells you the respect he had for the game and how he played it. He was tough, he was competitive, and he played in such a courageous way – he just threw his body at everything to make a save.”

“His impact, especially in the goaltending position, is huge. We’ve had guys battling for two [goaltending] spots on the national team and they all look towards Steve as the inspiration as to why they took on the position. He made it a real cool thing to do.”