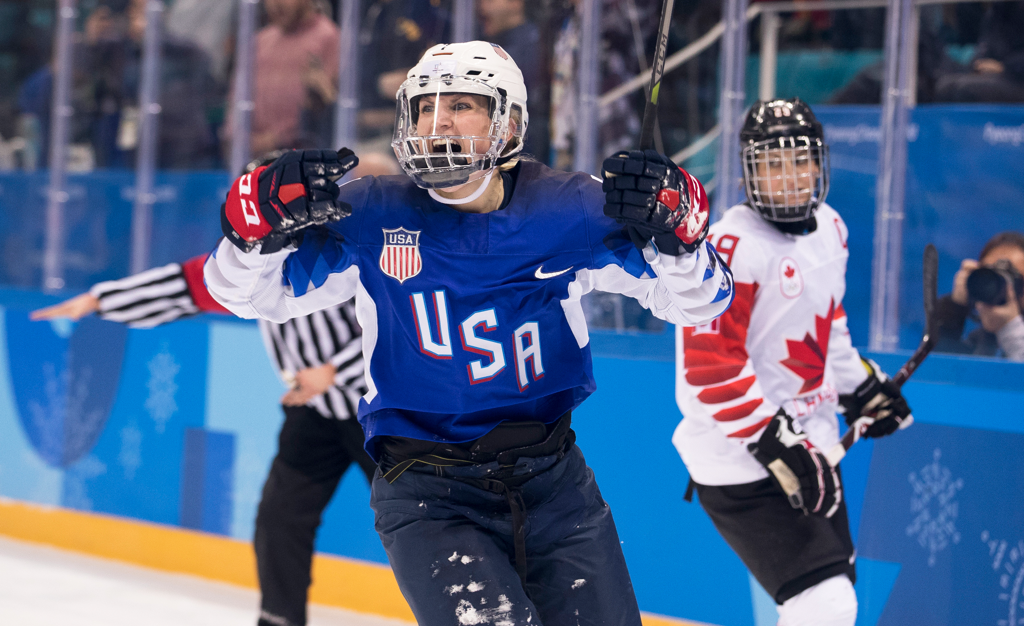 Changing positions is never an easy task. Doing so as an elite athlete can be challenging on many levels.

But that is exactly what Monique Lamoureux-Morando did in the final years of her career with the U.S. Women’s National Team, shifting from forward to defense. And she did so to excellent reviews.

“It's probably even harder to go from offense to defense,” said Hall of Famer Angela Ruggiero, who played defense for the U.S. in four Olympics. “Because defense, if you haven’t played it a lot in your lifetime, knowing angles and how to remove a player from the puck in the women’s game without running them over, how to jump into the play ... there’s all these nuances."

"I played forward a few times and it’s, ‘put the puck in the net.’ There is a lot more skill involved, in my opinion, in defense. [Monique] made that transition well.”

It was that versatility that was a trademark of Lamoureux-Morando’s game and why she will be part of a five-person class going into the U.S. Hockey Hall of Fame on Wednesday, Nov. 30 in St. Paul, Minnesota. Joining Lamoureux-Morando in the Hall’s 50th Class are twin sister Jocelyne Lamoureux-Davidson, as well as Steve Cash, Jim Johannson and Ryan Miller.

Going from offense in the 2014 Sochi Olympics to defense for the 2015 World Championships took a great deal of work. Those types of changes don’t always go smoothly.

“Not every athlete could do that,” said Ruggiero. “That not only takes physical awareness to learn how do you skate backwards and all that; it takes skill as well. And then performance in the clutch, which obviously she did, producing points, but you don't always get credit when you stand up to a Canadian offensive player and slow them down. That might show up on your plus/minus, but only your teammates or really avid fans could say she contributed to the success of the team without actually being on the scoreboard. That was the kind of player she was.”

Lamoureux-Morando not only helped the U.S. to unparalleled success on the international stage over the course of her 14 years with the U.S. Women’s National Team; she also excelled as a collegiate player, both at the University of Minnesota and University of North Dakota. She became North Dakota’s all-time leader in points by a defender and during her three-year career at UND, she became the program’s second all-time points leader with 190 career points. She was also a two-time All-American and Patty Kazmaier Award nominee.

Ruggiero knew what she meant when she called Lamoureux-Morando “clutch” – and never was that more evident than the 2018 PyeongChang Olympics in the gold-medal game against rival Canada.

The U.S. trailed the four-time defending Olympic gold medalists 2-1 as time in the third period started to become precious. But that is when, with help from a cross-ice pass from Kelly Pannek, Lamoureux-Morando caught Canada during a shift change to score on a breakaway and tie the game with 6 minutes, 21 seconds left in regulation. That allowed Jocelyne Lamoureux-Davidson to win it in the shootout, the first U.S. Olympic gold medal since 1998.

It wasn’t a surprise that it was the twins who came up big when the U.S. needed a boost.

“It goes down to their roots and the hard work that they both brought to the game and the willingness to do it,” said Ruggiero, who was on that 1998 team that won the gold medal in the sport’s Olympic debut. “It took that highly, highly competitive spirit, which I loved, as someone that was highly competitive myself. And being a veteran of four Olympics, you see a lot of players come through, in and out of the system. The two of them always stood out. You could tell right away they were going to fit in and they were going to push you and they were going to want more.”

While being a twin is sometimes hard to separate yourself, Ruggiero said that Lamoureux-Morando just had a toughness and competitive spirit that made her stand out.

“She has an incredible family,” Ruggiero said. “They’re all obviously a hockey family. Her mom, her dad, just good people. Having a sister that you’re probably highly competitive with your entire life and brothers that want to kick your butt, it seems like she’s always come from a very down-to-earth family that prides [itself] on hard work and not taking shortcuts.”

Part of that legacy includes creating a better path for females in hockey.

“Monique wanted to win and wanted to play hockey and evolve from not just a hockey player, but to a gender-equality advocate and role model and be visible in that way,” Ruggiero said. “Having a child and trying to try to come back and things like that. I'm just proud of that.”