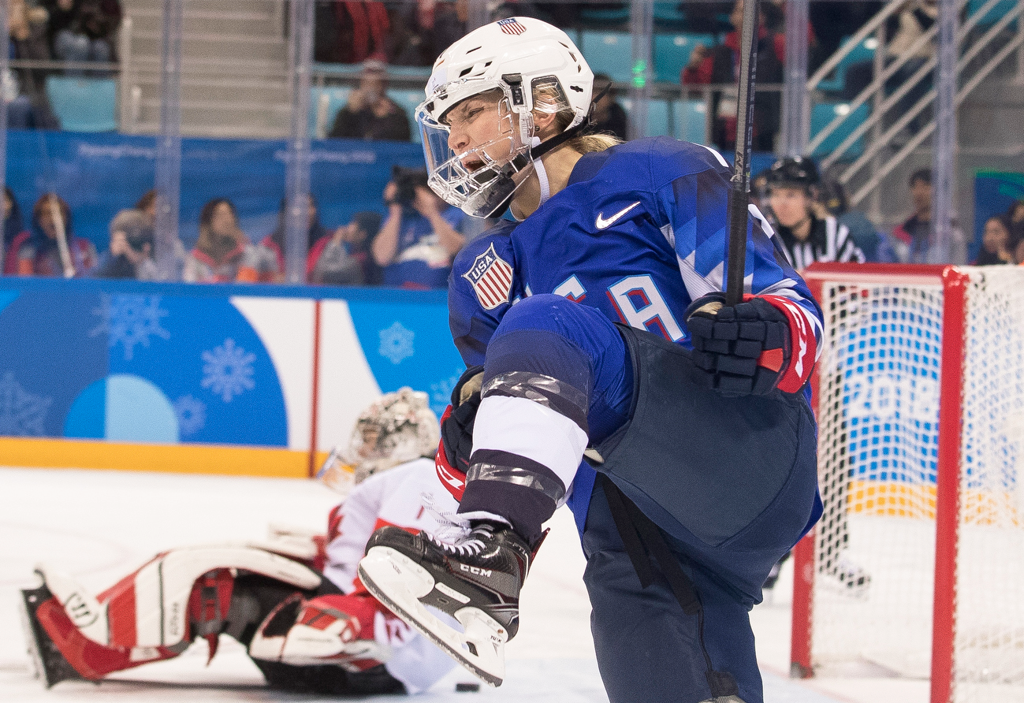 For any athlete, being the difference in a big game with a championship on the line is the ultimate dream.

What Jocelyne Lamoureux-Davidson did in the 2018 PyeongChang Olympics gold-medal game against Canada lives on as one of the greatest moments in USA Hockey history. Facing the four-time defending Olympic gold medalists and uber-rival, Lamoureux-Davidson scored a dazzling goal in the sixth round of the shootout to give the U.S. a 3-2 victory and its first gold medal since 1998, the year the sport debuted on the Olympic stage.

“I think anyone that thinks of Jocelyne Lamoureux will think of that goal,” said Meghan Duggan, who served as captain of the gold medal-winning U.S. team. “Why it sticks out to me is that when she was chosen to go in that spot, I think our whole bench relaxed just knowing how she was made for those types of moments. And if there was anyone on our team that I would have wanted, [it] would have been her.”

For that moment and much more, Lamoureux-Davidson is part of the 50th Class going into the U.S. Hockey Hall of Fame on Wednesday, Nov. 30 in St. Paul, Minnesota. She will be enshrined alongside sister Monique Lamoureux-Morando, along with Steve Cash, Jim Johannson, and Ryan Miller.

That Olympic score has been dubbed the “Oops, I Did It Again” goal, and while there is some sort of a Britney Spears tribute in there, Duggan — a three-time Olympian who also has two silver medals — said it was a move that didn’t come out of thin air.

“That was something that she thought of, studied and worked on for months and months and months in case she was given an opportunity like that,” said Duggan, now the director of player development for the NHL’s New Jersey Devils and president of the Women’s Sports Foundation.

In addition to helping Team USA to the gold medal in 2018, Lamoureux-Davidson earned Olympic silver medals in 2010 and 2014. She also won gold medals at six world championships, and is tied for the third-most gold medals at the women’s world championship in U.S. history. During her three Olympic appearances, the Grand Forks, North Dakota, native had six goals and 10 assists in 15 games.

For her international career, she had 63 goals to go along with 75 assists, notching 138 points in 137 games. Lamoureux-Davidson also had a stellar collegiate career with the University of Minnesota and University of North Dakota, following her development alongside her sister at Shattuck-St. Mary’s.

But Lamoureux-Davidson’s impact was felt off the ice as well.

Going into the U.S. Hockey Hall of Fame with twin sister Monique is fitting. They have shared so many life moments together and consistently pushed each other to be the best that they can be on the ice.

“Some of us used to ask them, ‘Does it bother you guys that you’re always grouped together as a package? And whatever you kind of do, you’re always referred to as the twins,” Duggan said. “It never did. That was just their identity and they loved it and owned it. There was no one more competitive with each other than the two of them. They would push each other to the ‘nth’ degree. They would hold each other accountable. I think their relationship was really admirable and certainly a huge reason why they were able to achieve what they did.”

Another mark the twins made was striving for better conditions for the women’s national team.

“There was a group of us that really kind of helped lead the team and Jocelyne and Monique were incredibly engaged and driven and right at the front of trying to push to make women's hockey better in our country,” Duggan said. “I can think of late-night phone calls and meetings that I was in with Jocelyne and just things we threw against the wall and how we were trying to problem solve and she was just a really great leader for our team in that moment.”