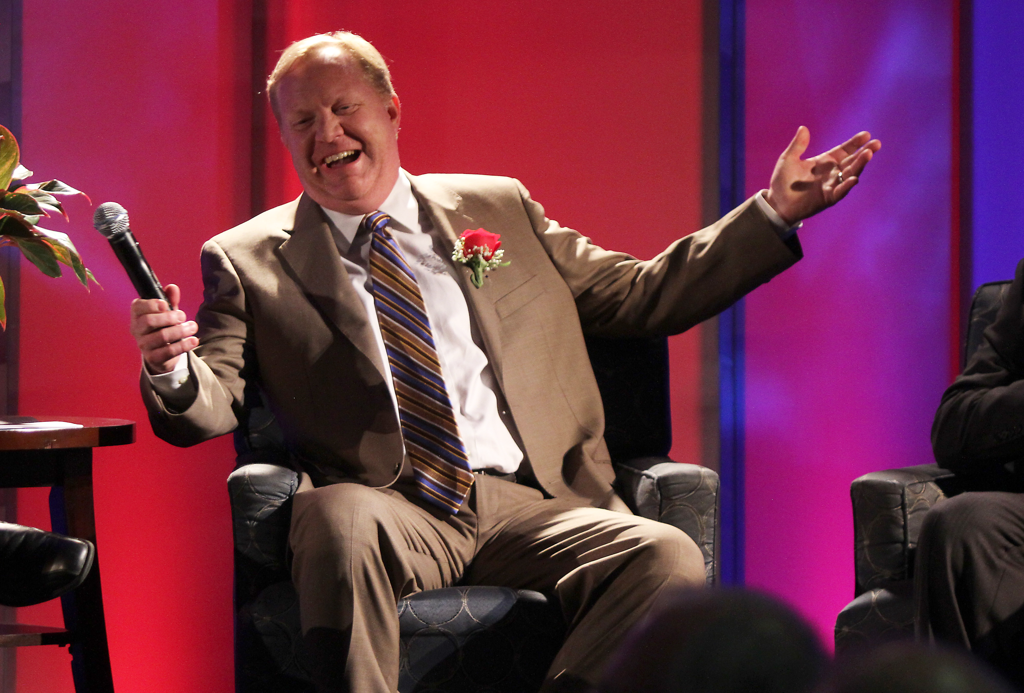 Jim Johannson was the driving force behind USA Hockey’s competitiveness at every level of competition.

For nearly two decades, Johannson was an executive with USA Hockey, rising through the ranks through his diligent work on the international stage. Johannson will join Steve Cash, Jocelyne Lamoureux-Davidson, Monique Lamoureux-Morando and Ryan Miller as the 50th class inducted into the U.S. Hockey Hall of Fame on Wednesday, Nov. 30 in St. Paul, Minnesota.

Johannson’s enshrinement comes posthumously, after he passed away at age 53, just three weeks before the team he assembled took the ice in the Olympic Winter Games PyeongChang 2018.

But as much as his work to build USA Hockey’s credentials on the ice are why Johannson is part of this class, it is the personal side of the Rochester, Minnesota, native off the ice that is pointed out by those who knew him well.

“Incredible friend,” USA Hockey Executive Director Pat Kelleher said. “Incredible teammate in everything and to everyone, no matter the role on a team or within USA Hockey. He was just great with people, an infectious laugh that no one will ever forget. And just enjoyable to be around in a good standing sense of humor, amazing sense of humor.”

USA Hockey captured 34 gold medals among the total 64 medals won during Johannson’s time as an executive. Even now, nearly five years after his death, his impact is still remembered as members of the international hockey community often fondly recall stories about Johannson.

“I just think he was a former player that knew and respected the individual player,” said Tony Granato, who coached the 2018 men’s Olympic team Johannson put together. “Lots of teams that he put together, he was able to figure out how to get guys excited to play in all those special tournaments.”

“Here's what I love best about Jimmy. He goes, ‘What I love about where we're at now is when we go to these tournaments, we don’t just go to participate anymore, we go to win, and when we go, we expect to win and we expect to win a medal.’ And that's part of why I think USA Hockey came a long way, it was because of that leadership and that mentality.”

Granato, a U.S. Hockey Hall of Famer through his playing career at the University of Wisconsin and the NHL, said spending what would be the last months of Johannson’s life putting that 2018 Olympic team together will stick with him forever. Compounding the usual challenges of constructing a team, the NHL didn’t allow its players to compete in PyeongChang. The 2018 U.S. Olympic team, comprised of minor-leaguers, college players and those on teams overseas, fell short of its goal, losing in the quarterfinals to the Czechs, 3-2, in a shootout.

Granato called himself lucky to be able to spend a lot of time with Johannson during those months.

“The tragedy of him passing is still one that’s hard to deal with from the standpoint that it just came so unexpected and he was somebody you expect to be around and be a friend for a long, long time,” Granato said. “So the tragedy of him being gone still hurts because when you lose someone in the prime of their life, that is bigger than just being a really special hockey person.”

Tears will be shed at the Hall of Fame induction ceremony, but one of the things that made Johannson special was his ever-present sense of humor.

“He was a great prankster,” Kelleher said with a chuckle. “He would remember the littlest moments and he would somehow turn it into a joke that you couldn't help but laugh at — usually at your own expense. Always enjoyed being around people and having fun.”

One example Kelleher recalled was when his house was being painted and Kelleher’s wife was a little upset that it looked like it was now pink. Kelleher insisted it wasn’t, but that didn’t stop Johannson from capitalizing on the opportunity. One day, Johannson swung by the Kelleher home with a CD of John Mellencamp’s hit song “Pink Houses.”

Still, it was Johannson’s ability to connect with the players and get them to buy into their roles. On teams of all-stars, regardless of gender or age level, you have players who are the go-to scorers on their team that might end up on the checking line for an international tournament. Granato said Johannson was a terrific communicator and made sure the players knew their spot on the team before coming to camp.

“Somewhat lost in how good Jimmy was as an exec and as a person, he was also a heck of a player that went to two Olympic Games,” Kelleher said. “So he had great experience as a player. He played professionally in North America, he played professionally in Europe. I think he just understood that, even at that high level, he was really a little bit of an underdog. So he could see things in players that maybe others couldn't and he would definitely go to bat for a guy that he would believe in.”

When it comes to USA Hockey history, the underdog story of the “Miracle on Ice” team is the one that sticks out the most. But in recent years, a podium finish at any level for USA Hockey is no longer unexpected thanks in part to what Johannson did behind the scenes.

“The biggest part for me — and it’s important — is the legacy that he has left,” Granato said. “I honestly hope that it continues forever because I think the impact he had on USA Hockey was extremely significant for the development and growth of our players and our programs and our teams. So J.J., even though he’s been gone for a while now, five years, our USA teams — world championship team, Olympic teams, national teams — will have the opportunity to continue to grow because of his contributions and what he has done in helping our game, the game and our country in particular.”