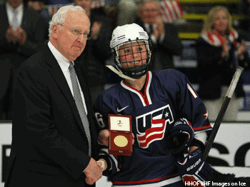 OLORADO SPRINGS, Colo. – Murray Costello will be presented with the Wayne Gretzky International Award as part of the U.S. Hockey Hall of Fame Induction Ceremony & Dinner on Monday, Oct. 15, at the Plaza of the Americas in Dallas, Texas. The award, established by the U.S. Hockey Hall of Fame in 1999 and first presented to its namesake, pays tribute to international individuals who have made major contributions to the growth and advancement of hockey in the United States.

"Murray Costello has been a wonderful contributor to hockey's growth in the United States, as well as the world," said Ron DeGregorio, president of USA Hockey. "During his time with the IIHF and Hockey Canada, he has been incredibly forthcoming with the spread of knowledge and ideas that can positively impact American administrators, coaches and players of all ages."

Costello has been an International Ice Hockey Federadtion Council member since 1998 and served as vice president of the organization since 2008. He has been a key member of numerous IIHF committees, including as chairman of the competition, junior, medical and technical/arena committees. From 1979-98 he was the president of Hockey Canada.

Throughout his time with Hockey Canada and the IIHF he has been an extremely positive influencer of hockey in the United States. Alongside former USA Hockey president Walter L. Bush, Jr., Costello was a major proponent of women's hockey. Hockey Canada hosted the inaugural IIHF Women's World Championship in 1990, which helped pave the way for the debut of women's hockey in the 1998 Olympic Winter Games. Additionally, Costello helped USA Hockey and Hockey Canada collaborate on coaching education projects in the late 1970s. The basis for the U.S.-Canada junior transfer agreement also dates back to Costello's cooperation with USA Hockey executives.

"Murray has been a pleasure to work with during my time at USA Hockey," said Bush, who currently serves as USA Hockey's chairman of the board. "He has represented our sport with great class during his time with Hockey Canada and the IIHF. I appreciate all he has done to cooperate with USA Hockey's growth and development for men and women. His willingness to exchange ideas and grow the game across borders has been tremendous."

Costello's term as president of Hockey Canada was filled with transformation. In 1994, he consolidated the Canadian Hockey Association and the former independent Hockey Canada organization under the name of Hockey Canada. He was instrumental in the creation of the Canadian women's hockey program, which spurred the growth of the sport among young women. Additionally, he led Hockey Canada to create its Program of Excellence for both men and women.

A native of South Porcupine, Ontario, Costello played in the National Hockey League for three Original Six franchises (Chicago Blackhawks, Boston Bruins and Detroit Red WIngs) from 1953-57. After his playing career ended, Costello earned a law degree and became an executive with the Western Hockey League's Seattle Totems. He moved on to become the WHL's publicity director and eventually the arbitrator for the World Hockey Association Players Association.

Costello was inducted into the Hockey Hall of Fame in 2005.

Information on how to purchase tickets to the 2012 U.S. Hockey Hall of Fame Induction Ceremony & Dinner can be found here.