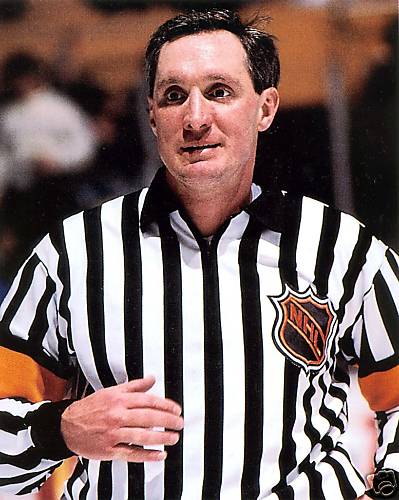 The first American to referee more than 1,000 NHL regular-season games, Paul Stewart is one of the most respected officials to ever lace up the skates. He still stands today as the only American who played and refereed in the NHL after skating in 21 games with the Quebec Nordiques during the 1979-80 season.

Stewart is described by many as a man who lives and breathes the game of hockey. In February of 1998, he was diagnosed with Stage 3 colon cancer. He returned to the ice in November of the same year while undergoing chemotherapy treatment. He went on to serve as an ambassador for the NHL’s Hockey Fights Cancer campaign from 1999-2008, helping raise support and money for national and local cancer research institutes, children’s hospitals, player charities and local cancer organizations.

His love for growing the game goes beyond his work with Hockey Fights Cancer. He has served as director of the Bill Stewart Foundation for more than 20 years, helping raise money for inner city youth sports. On top of that, he builds and maintains an 80X40 rink in his backyard every winter in Walpole, Massachusetts, to give children the opportunity to skate.

Stewart was the recipient of the coveted National Association of Sports Officials Gold Whistle Award in 2001, recognizing an individual who has made tremendous contributions to his or her community and has experienced a successful officiating career. He officiated 1,010 NHL regular-season games, along with 49 games during the Stanley Cup playoffs and two NHL All-Star Games.

U.S. Hockey Hall of Fame member Jeremy Roenick (2010) said, as a player, “(I) felt certain that it was always about the good of the game, letting the players play fairly and safely, when I saw that Stewy was reffing. He had personality, strength of character, and an officiating style that made me and the other players feel good about him being out there with us.”

After a career filled with North American hockey, Stewart rounded out his journey as chair of officiating and advisor for discipline in the Kontinental Hockey League (KHL) from 2012-2015.