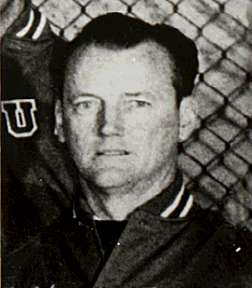 Jack Riley was an outstanding college player at Dartmouth whose career was interrupted by WW II while he was playing as a sophomore in 1941. He returned to college in 1946, however, to captain the team that tied the University of Toronto for the North American title.

From 1942-46, he served as a U.S. Naval Aviator in the Pacific Theatre, and in 1948 Riley went on to play for the U.S. Olympic Team, which finished fourth at St. Moritz, Switzerland. From there, he went on to serve as the player-coach of the 1949 U.S. Men's National Team, which gained a third place finish at the World Tournament at Stockholm, Sweden. Incidentally, the U.S. was the only team to defeat the world champions from Czechoslovakia, 2-0, thanks to Riley’s two goals.

From there, Riley went on to join the staff of the U.S. Military Academy in 1950, where he became head coach in 1951 and remained until 1986, when he passed the reigns to his son, Rob. Over that span at Army, he was twice named as the NCAA Coach of the Year. Incredibly, he posted just six losing seasons in his 36 years at West Point, and at the time of his retirement, his 541 career wins were second only to Michigan Tech’s John MacInnes in the history of NCAA hockey.

Perhaps the highlight of his storied career, however, came at Squaw Valley in 1960, when he led an underdog American team past the likes of several of the world’s great ice powers—Canada, Russia, Czechoslovakia, and Sweden, to capture the country’s first gold medal in Olympic competition. Riley’s squad swept undefeated through the preliminary and championship rounds to the gold medal victory. The pivotal game in the series was the clash against Russia. With 10,000 fans jamming Blyth Arena and a national television audience on hand, the game proved to be a classic. Coach Riley best describes the final minutes:

“The 5’10”, 145 lb. Billy Christian foiled goalie Puchkov again at 14:59 of the last period. Getting the puck on a play set up by his brother Roger and by Williams (Tom), Billy outsmarted Puchkov again when the goalie came out to cut down the angle of the shot. The puck went in, and our players and the jubilant crowd jumped for joy. That was it, as McCartan and the stalwart defensemen fought off the Russians the rest of the way.” Then, a come from behind 9-4 victory over the Czechs that next day proved to be the clincher.

Riley received the coveted Lester Patrick Trophy in both 1986 and 2002.