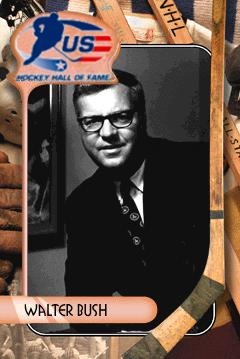 Known widely as the primary founder of the Minnesota North Stars, Walter Bush found success in hockey as a prep school player, college and amateur player, amateur coach and Olympic manager, before getting into the executive side of the professional aspect of the sport.  The Minneapolis native began his hockey career at Breck School and continued at Dartmouth.  While working on his law degree at the University of Minnesota, he kept his skates sharp by playing senior hockey and helping to organize the U.S. Central League.  He then became active on the international scene, managing the 1959 U.S. National Team and the 1964 U.S. Olympic Team, serving on the U.S. Olympic Committee in 1963, and later a four year term on the USOC's Hockey section.  He has also participated as president and vice president of the Minnesota Amateur Hockey Association and as a director of the Amateur Hockey Association of the United States.

Instrumental in bringing professional hockey to Minnesota in the form of the Minneapolis Bruins, Bush later put all his credentials to work in securing an NHL franchise for Minnesota in 1967, the North Stars.

Among his many awards and accolades, Bush was the first "grass roots American" to win the Lester Patrick Trophy, which he received in 1973; was named as the NHL's Executive of the Year in 1972 by the Hockey News; and was enshrined into the Hockey Hall of Fame in Toronto in the year 2000.  In addition, Bush has also served as the President of USA Hockey for the better part of the 1990s.  A man with a true passion, he is a real Minnesota hockey legend.