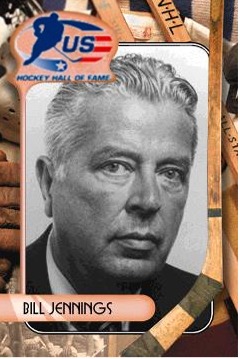 As one of the most influential and active governors in the National Hockey League, Bill Jennings emerged as the architect of the league's dramatic expansion during the late 1960s and into the late 1970s. He served as chairman of the league's Board of Governors from 1968-1970 in addition to serving on or chairing virtually every other league committee during that same era. In 1966, Jennings originated the NHL's Lester Patrick Award Dinner, which annually honors persons for "outstanding service to hockey in the United States." He won the Lester Patrick Award in 1971.

He was also instrumental in the establishment of the New York office of the NHL in 1964 and in the establishment of the Metropolitan Junior Hockey Association, as well as in the continued development of amateur hockey in the Metropolitan New York area. Besides his distinguished hockey career, Jennings was active for over 25 years in the conduct of professional golf tournaments for the benefit of Westchester County hospitals. In 1967, he founded the Westchester Golf Classic and served as its general chairman, raising nearly $4,000,000 for the participating Golfers' Association of America.

In addition to his sporting interests, the Princeton graduate was a senior partner of the New York City law firm of Simpson Thacher & Bartlett, and a director of various major corporations. He was also honorary chairman of United Hospital in Port Chester, N.Y. His contemporaries said it best of Bill Jennings: "He is one of professional hockey's most dynamic and successful executives for more than two decades, and has proven a most influential force in the dramatic and successful operation and expansion of professional hockey, in general, and the National Hockey League in particular."

The National Hockey League previously recognized Jennings' contribution by naming him to the Hockey Hall of Fame in Toronto in 1976.