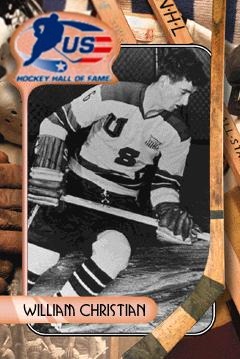 Mention the name Christian to American hockey followers and there is instantaneous recognition.  After leading his Warroad high school team to the state tournament finals in 1953, Billy Christian played one year at the University of Minnesota under coach John Mariucci before joining the 1958 United States National Team - the first American athletic team to ever play in the Soviet Union.

Bill was the team's leading scorer with seven goals and five assists, as the squad finished with a respectable 3-3-1 record in the World Tournament at Oslo, Norway. That would mark the first of five National/Olympic teams on which Bill Christian participated, with the others coming in 1960, 1962, 1964 and 1965.  But, it is, of course, 1960 that is best remembered, as Billy helped guide the fabled squad to the gold medal by scoring the tying and game-winning goals against the Russians - the later coming on an assist from his brother, Roger.

Christian later played for his hometown Warroad Lakers for 23 years before finally retiring after the 1980 season.  The team never had a losing season during this period and won Canadian Intermediate titles in both 1964 and 1974.  In both 1969 and 1970, Bill was the All Star coach as the Lakers were Manitoba Senior Hockey League champions.  With the Lakers he had the good fortune to play with both his sons, Eddie and David.  Both sons played college hockey with David going on to a professional career in the NHL.

In 1964, with other family members, he helped found Christian Brothers, Inc., today a multi-million dollar hockey stick and equipment manufacturing company.  He continues his work for hockey through community service, and also through youth coaching - which he has done on and off at youth levels for several decades in Warroad.