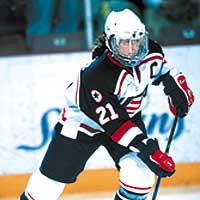 Catherine "Cammi" Granato's extraordinary playing career, particularly at the international level, has played a key role in the growth of women’s hockey not only in the United States, but across the world. After learning to play hockey in the backyard of her Downers Grove, Ill., home with her sister and four brothers, she earned a scholarship at Providence College, where she established goal-scoring records and captured ECAC Player of the Year honors from 1991-93.

A 15-year member of the U.S. Women’s National Team beginning in 1990, Granato is the program’s all-time scoring leader with 343 points (186-157) in 205 games. She achieved international fame by captaining Team USA to the gold medal at the 1998 Olympic Winter Games in Nagano, Japan, the first time ever women’s ice hockey was included in the Games. Four years later, she captained the United States to the silver medal at the 2002 Olympics. In her last international competition and ninth World Championship, she led Team USA to the gold medal, its first-ever in an IIHF World Women’s Championship. In 2007, Granato received the NHL’s Lester Patrick Award in recognition of outstanding service to hockey in the United States, and, in 2008, she was enshrined into the IIHF Hall of Fame.

Granato was the first woman to be honored with the aforementioned awards and will be the first female to be inducted into the U.S. Hockey Hall of Fame.