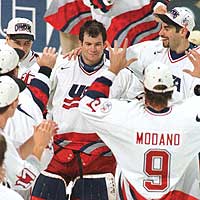 Mike Richter played in 666 games during his 14-year NHL career, all with the New York Rangers. His 301 wins with the team are more than any other Rangers goaltender and he helped the club win its first Stanley Cup in 54 years.

Playing full-time for the Rangers beginning during the 1990-91 season, he was a finalist for the Vezina Trophy as the league's top goalie in just his second full season in the NHL. In 1993-94, Richter was selected as the MVP of the NHL All-Star Game and went on to set a Rangers’ single-season record with 42 wins in leading the team to the President's Trophy and its first Stanley Cup title since 1942. Beyond making a huge impact for the Rangers, Richter also was an integral part of the U.S. program for parts of three decades. He is one of just 10 Americans ever to compete in at least three Olympic Games, including in 2002, when the team captured the silver medal. In addition, he led Team USA to the World Cup of Hockey championship in 1996 and was named the tournament's MVP. He also played in two IIHF World Junior Championships (1985-86), three IIHF Men's World Championships (1986-87, 1993) and the 1991 Canada Cup.

Richter, a three-time NHL All-Star, played two seasons of college hockey (1985-87) at the University of Wisconsin before beginning his professional career.