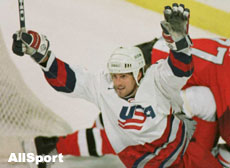 Tony Amonte played a major role in one of the most memorable moments in U.S. hockey history when he scored the game-winning goal against Canada at 17:25 of the third period in the deciding game of the the inaugural World Cup of Hockey in 1996.

After being selected by the Rangers in the fourth round (68th overall) in the 1988 NHL Entry Draft, the Hingham, Mass., native recorded 69 points (35-34) during his rookie season in 1991-92, placing third in the Calder Trophy balloting, an award that goes to the NHL's top rookie.