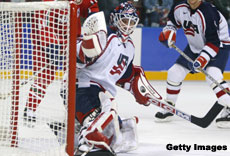 Tom Barrasso, who won back-to-back Stanley Cup championships with the Pittsburgh Penguins (1991, 1992), is one of the finest American-born goaltenders to play the game.

Among U.S.-born netminders, Barrasso ranks first in National Hockey League playoff victories (61) and second in regular-season victories (369). In addition, he holds the NHL record among goaltenders for career points (48) and assists (48).

Following his rookie season in 1983-84, Barrasso captured the Vezina Trophy as the NHL's top goalie after posting a 26-12-3 record and was also named the recipient of the Calder Trophy as the league's top rookie. In addition, he earned a spot on the NHL All-Rookie Team and the NHL All-Star Team. He led the NHL in wins (43) during the 1992-93 season and ranked among the top 10 in the league in victories on nine separate occasions.
The Boston native was a member Team USA at the 2002 Olympic Winter Games and helped the squad capture the silver medal. Barrasso also played for Team USA at the 1983 International Ice Hockey Federation World Junior Championship, the 1984 and 1987 Canada Cups, and the 1986 IIHF Men's World Championship.