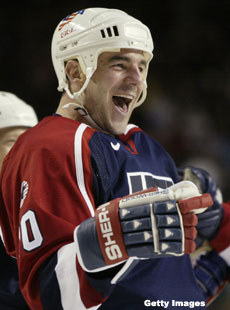 The first American-born player to record three consecutive 50-goal seasons in the National Hockey League (1995-98), John LeClair played 16 years in the NHL and helped the Montreal Canadiens capture the Stanley Cup in 1993.

LeClair, who also had stops with the Philadelphia Flyers and Pittsburgh Penguins in his distinguished career, registered 406 goals and 413 assists for 819 points in 967 career games. He currently ranks 13th on the NHL's all-time points list among American-born players.

A two-time Olympian (1998, 2002), LeClair ranked second on the team and third overall in points at the 2002 Olympic Winter Games, helping lead Team USA to the silver medal. He was also a member of Team USA at the 1996 World Cup of Hockey, and the U.S. National Junior Team at the 1988 and 1989 IIHF World Junior Championships. LeClair netted 34 career points (22-12) in 31 games in a Team USA uniform.