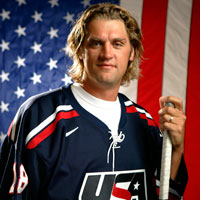 The first American-born team captain in the National Hockey League to have his name engraved on the Stanley Cup, Derian Hatcher was one of the game’s great defensive forces.

Selected eighth overall in the 1990 NHL Entry Draft by the Minnesota North Stars, Hatcher went on to play 16 seasons in the league. His first NHL action came in the 1991-92 season, when he appeared in 43 games for the North Stars and was named the team’s Rookie of the Year.

After the franchise’s move to Dallas in the summer of 1993, Hatcher racked up career-highs in both penalty minutes (211) and points (31) during the 1993-94 season and was named the Stars’ top defenseman. From 1994-96, his older brother, Kevin, joined him on the blueline in Dallas, and in 1997, he was named to his first NHL All-Star Team. Hatcher then led the Stars to their first Stanley Cup in franchise history in 1999 to become the first American-born captain of a Stanley Cup winning team.

Hatcher made the NHL’s All-Star Second Team in 2003 before departing Dallas to play the 2003-04 season with the Detroit Red Wings. He spent the final years of his NHL career with the Philadelphia Flyers (2005-08), serving as team captain for the end of the 2005-06 season.

Hatcher’s defensive presence was not only recognized in the NHL, but on the international stage as well. He helped the United States to one its brightest moments as part of the gold medal-winning 1996 World Cup of Hockey Team. Hatcher recorded five points (2-3) in six games in the tournament. Additionally, he was a member of two U.S. Olympic Men’s Ice Hockey Teams (1998, 2006) and two U.S. Men’s National Teams (1993, 2002).

Hatcher and his wife Heather are the parents of sons Chase and Kelton and daughters Shallyn, Hallie and Finley.