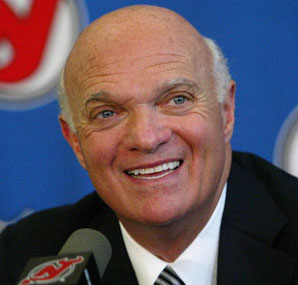 Under the direction of Lou Lamoriello, the New Jersey Devils are one of the most successful teams in the National Hockey League, as evidenced by five appearances in the Stanley Cup Finals, including titles in 1995, 2000 and 2003. Inducted into the Hockey Hall of Fame in 2009, the president, general manager and CEO of the Devils has been with the club since 1987 and has served as general manager for a single franchise longer than any other GM in the league. Lamoriello led the Devils to their first winning season and to the Wales Conference Finals during his first campaign and, under his guidance, the team has advanced to the NHL playoffs in 21 of the last 23 seasons. Prior to taking his current position, Lamoriello led the Providence College men's ice hockey team as head coach from 1968 until he resigned in 1983 to focus on his duties as athletic director of the college. In his final season as head coach (1982-83), Lamoriello led the Friars to a best-in-the-nation 33-10-0 record and a berth in the Frozen Four for the first time since 1964. As athletic director, Lamoriello played a central role in the formation of the Hockey East Association and the establishment of an interlocking schedule with the Western Collegiate Hockey Association. He was the first commissioner of the Hockey East Association, a position he held from 1984-87 while also serving as PC's athletic director. Lamoriello also helped establish the first-ever college hockey television package. In 1988, Hockey East named its conference championship trophy in his honor. The Providence, R.I., native has also made his mark on the international stage, serving as general manager of gold-medal winning Team USA at the 1996 World Cup of Hockey and for the U.S. entry in the 1998 Olympic Winter Games.